An Interview with The Waterside Shopping Centre

The Waterside Shopping Centre is located in the heart of Lincoln City Centre, accessible by foot, car, bus and rail. Nestled between the Stonebow and High Bridge, Waterside is a host to numerous branded and independent stores, all housed in one state-of-the-art, modern shopping centre. As a Main Sponsor for Lincoln Fashion Week, we raised some questions to the Marketing & Promotions Coordinator, Mary-Jane Booth, about their involvement with Lincoln Fashion Week.

Since the beginning of Lincoln Fashion Week three years ago, Waterside Shopping Centre has been a main sponsor for the event and as Mary-Jane explains, they have always been ‘very keen to see the event come to life’.

“I think there had been conversations here at the centre for many years around how good it would be to celebrate fashion and showcase local talent but they never came to fruition. So, when Lincoln BIG said it wanted to stage Lincoln Fashion Week, we were only too pleased to get involved.” 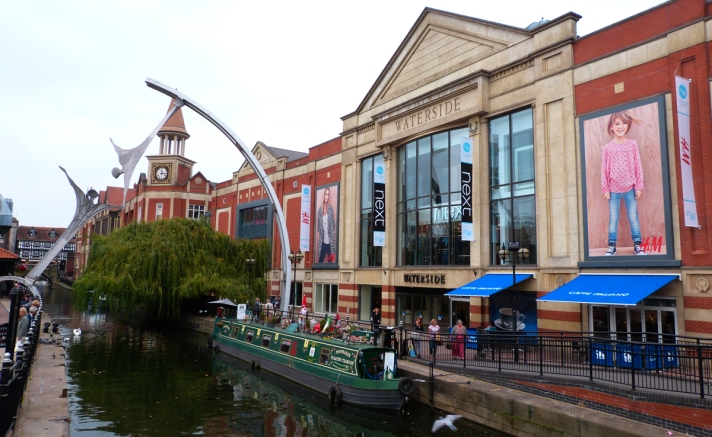 With that being said, Lincoln Fashion Week is running for its third and best year yet. Mary-Jane had the following to see regarding its development;

“We’re very pleased with how Lincoln Fashion Week has developed. Each year, more retailers and brands get involved, more independent fashion designers, hairdressers, make-up artists and the like get involved, which is great. Lots of people attend the Fashion Show, with schools and aspiring models taking part as well, which is brilliant! As one of the sponsors, it’s great to see that our support has such a positive impact and makes the event possible.”

Following this response, we wanted to explore why it was important to the Waterside to be involved in local community events and as was stated, with the shopping centre being one of ‘the largest parts of Lincoln’s fashion offer’ they are able to promote their branded stores and independent businesses to the community as they have a ‘great mix of retailers’ to present to the local area.

“Next and H&M, Claire’s, Yours, Roman and New Look as well as Topshop, which will be complemented by Topman in the summer when both brands come together under one roof in a fantastic new store here in the centre.”

Mary-Jane further explained how the centre plays a large part in working with and helping local community groups and that this is something that the centre has always actively participated in. For those that did not know, the Waterside hosts a monthly craft fair, as well as regularly hosting their charity of the year, St. Barnabas, with fundraising events. They are also, in the coming months, introducing a regular artists’ market, all available within the centre itself. All of these events listed and more, are Waterside ‘giving back’ to their community as they are keen to do their bit within the community. You can find out more about everything that happens with the centre at their website.

“Supporting local events is something we’ve done since we opened. Being involved in Lincoln Fashion Week is a continuation of that.”

“Lincoln is a continually developing city”, as Mary-Jane explains, “and it has been since the centre opened” – it’s a response to demand as Lincoln needed a covered shopping mall where people could find a large range of leading brands and shops in a pleasant environment. Waterside is dedicated to bringing fashion to Lincoln whilst, at the same time, being complemented with the likes of Stormfront, Three and O2 – allowing customers to have a range to explore whilst looking great!

As we refocus on Fashion Week, that at this moment and time is only 17 days away, we asked Mary-Jane what the Waterside loves about participating in the week itself.

“Lincoln Fashion Week brings something different to Lincoln and involves a lot of different people, which is great! Events like the hair and make-up demonstrations that Talking Heads did in the centre last year brought in lots of people, as did the fashion shows that took place the year before. Lincoln Fashion Week also gives our retailers the chance to show off their great collections and promote themselves, which is important too.”

As discussed previously, Waterside is a home to many popular brand names that are recognised nationally and internationally. However, Waterside is determined to support local businesses and promote them to the community because in their words;

“Sometimes you want something that is truly unique, a one-off and that means shopping with independent businesses and sole traders, and Lincoln has a lot of those types of business. Because they’re smaller and are sometimes people’s hobbies, they can’t necessarily afford a high street presence. We like to support these people and this type of business as it extends what we offer and is our way of helping the local community. It also brings new people into the centre, which is great for our national retailers.”

Finally, as if the excitement of the fast approaching third Lincoln Fashion Week was not enough, there is a buzz on the horizon for the Waterside. In January the centre embarked on a £3 million improvement programme to make the centre better than ever before. This development will welcome TOPMAN and have it and TOPSHOP housed within the same centre. As we have read, the Waterside is all about the community and ensuring their centre is the best it can possibly be for its city and its people.

To finish, we asked Mary-Jane whether the centre will continue to support Lincoln Fashion Week through the years, to which she answered;

“I think as long as Lincoln Fashion Week is staged, we will be keen to be involved and support it.”